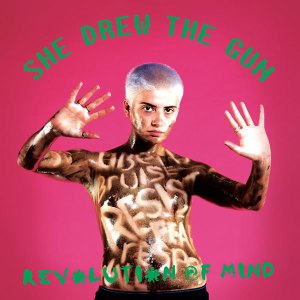 She Drew The Gun are from Liverpool, and have been described as dreamy psych pop. That works for me.

Fronted by / a vehicle for Louisa Roach, there’s more than a hint of the 60s, psychedelia and the like in the bands music. But this is also very much music for now. Winner of Glastonbury’s Emerging Talent contest in 2016, She Drew The Gun aren’t exactly what you think of as a protest singer, or their songs as protest songs. But these are songs rooted in the reality of 21st century life, but not ones that are content to let that life wash over her. Take this line from the Resister, the opening track of last year’s Revolution of Mind:

All the underdogs, black sheep/Fighters of the powers that be/
In tenements, high rises/Freedom fighters, the outsiders…

Roach isn’t a newbie on the block, either. Although having played music since her early teens, she has lived a life (she has a 12 year old son, returned to academia as a mature student) and her songs reflect that – shot through with a considered maturity and life experience, but not worn down by it. An observer, but one that empathises and roots for the underdog against the powerful. Something For The Pain comes from that place.

So probably not a massively well known song. But a good one nonetheless. Maybe a great one. The song sheet is quite a straightforward, nothing tricky chord wise, and a consistent chugging rhythm that works nice strummed on the uke. It’s a bit wordy, but those words are important. Persevere. And enjoy!

You’ll have noticed that ukulele-based songs are few and far between on this blog. That is kind-of deliberate, but also a reflection of the fact that, whilst I love playing the little 4-string wonder myself, it hasn’t let me towards wanting to listening to music made on the instrument. Call me a fraud if you like, a traitor if you want (in these febrile Brexit times, such accusations seem to get thrown around increasingly carelessly), but that is me.

Now I don’t actually know that there is a ukulele playing as the backbone to this song. There’s no credit of a ukulele player in the album credits. But a number of other reviews of the song have suggested that’s what it could be, and to my ears that sounds totally plausible. So I’m going to go with it.

A Perfect Miracle is the opening song, and lead single, from Spiritualized’s most recent album, And Nothing Hurt. It’s a beautiful, hazy waltz-time lullaby that starts off with nothing much more than that strummed ukulele, but then builds and swells to an increasingly glorious crescendo – strings, choirs, the lot. Actually, when you peer behind the sounds the lyrical content of the song is not quite what it seems – yes, there’s lots of lovely sentiment towards a loved one, but as the song progresses there is a thread of uncertainty and ambivalence that creeps in. But there’s still glimmers of light, so let’s hope it all ends well, eh?

And the song sheet. Well, to be honest, this is such a simple song it’s almost embarrassing to have one! Basically the song is the same four chords, repeated in sequence throughout. I’ve transposed the song up a semi-tone, from B to C, to make it easier to play. But other than that there’s not much more to say (although you can thrown in the occasional Gsus4 if you wish, to give a bit more colour). I have included the backing choir lyrics which are sung in parallel with the last three verses, so if there are more than one of you doing this I’m sure that will sound lovely. Do enjoy!

So here we with the second gig-inspired song in the last couple of months. Earlier this week I had the pleasure of spending a lovely evening with my daughter at the Wedgewood Rooms in Portsmouth, in the company of New York band Sunflower Bean.

Four months ago Sunflower Bean meant nothing to me. Since then, thanks to finally taking the plunge with a Spotify subscription (other streaming platforms are available), I’ve managed to catch-up on more new music than I’ve probably done in the last five years. And The Bean (as nobody calls them!) are one of my favourites. Whilst the band can certainly rock the house (new single Come For Me being a good example), one of the things that I love about the band is that they certainly don’t stick to a tried and tested formula. Indie in the original meaning of the word, the parent album for this song (Twentytwo in Blue) has moments of stomping Glam rock, Velvets-flavoured Garage rock, west-coast soft rock, dreamy psychedelics and shoe-gaze. And yet doesn’t come across as the stylistic ragbag that may suggest – there is a unified vision at the heart of the band that is all their own, and that gives them their own, unique identify.

Twentytwo is – I guess – the title track of the album. A twenty-something perspective on growing up and coming of age, the song packs a powerful combination of melancholy and defiance that has echoes Fleetwood Mac and the darker moments in the Abba catalogue. Luxurious and nostalgic, this is the sound of a band who know there mind and will follow the muse wherever it will take them.

And so to the song sheet. Nothing too clever or tricky here. This is a great song to belt out, but needs some textures and contrasts to bring it alive. Note that the song sheet is for the full version from the album – the video above is an edited version of the song that loses a verse and a few other nips and tucks. Enjoy! 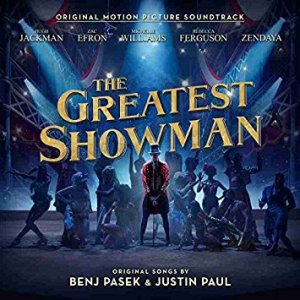 From the dark sounds of grunge to the corniest of dance-pop musicals, never let it said that you don’t get variety on these pages.

The Greatest Showman has become something of a phenomenon. A contemporary musical loosely based on the life of celebrated American showman P.T. Barnum (and, by all accounts, taking a slightly revisionist view of his character), the film opened to something of a critical mauling at the end of last year, but has seen its star slowly rise through word-of-mouth to become the most unlikely movie success of the year. Even now, 9 months after it’s release, it is still showing at cinemas around the country, with new life being breathed into it by hugely popular sing-a-long events.

Let’s be clear. This film is not subtle and is somewhat formulaic. But it is also hugely entertaining, a constant barrel of energy and exuberance, driven by a star performance from Hugh Jackman, and a supporting cast that includes Zac Efron and Michelle Williams. And a power-packed set of original songs that carry the film through to its inevitable, feel good conclusion. The soundtrack is the work of Benj Pasek and Justin Paul, who were also responsible for the Oscar-winning City Of Stars, from the slightly less feelgood La La Land.

And so to the songsheets. For Come Alive, this – like a number of the songs from the film – really needs a strong rhythmic backing to work. I’m not going to try and suggest a strumming pattern for this, but you could do worse than listen to the rhythms in the song and try and ape that. Plenty of muted strums will add to the effect – some of those are indicated in the songsheet with the [X] chord. The song also has a number of places where it breaks into acapella / clapped interludes, that again you could do worse than try and emulate. Probably best sung with a group of singers.

As for This Is Me, this is becoming something of a modern classic. The gentle start, and breakdown at the beginning of the last chorus, are worth emulating to give the song some texture. Note that some of the lyrics overlaps, particularly with the oh-oh-oh-oh’s, and along with plenty of opportunities for backing vocals and harmonies, this is probably best tried with a group of singers. 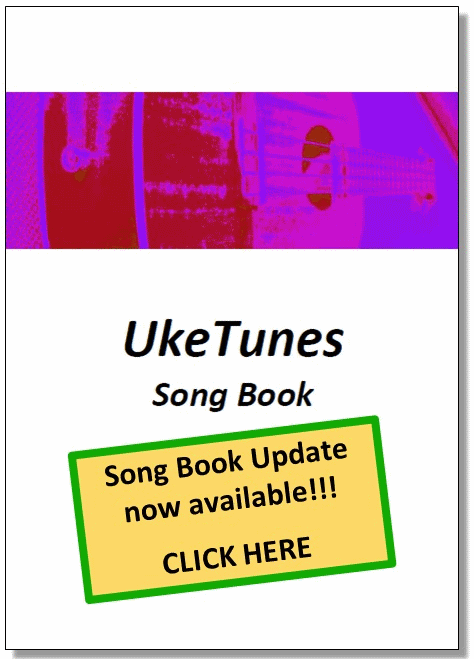