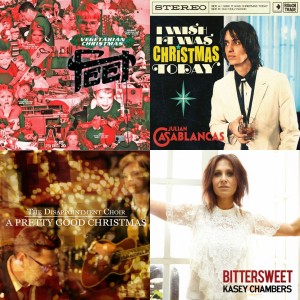 …and it’s time to roll out all the usual Christmas tunes. There’s always something reassuring about those old chestnuts (roasting on an open fire), and it is that recurring familiarity that wraps us in a comfort blanket of sound and memories. But those old standards were new once – hard as it seems to imagine – and their all pervasiveness hinders equally classic, but much less well-known songs, from getting the attention they deserve. So this post is a my small attempt to put that right, as I present four Christmas songs that – in my book – *are* classics, and deserve far wider attention than they get.

Exhibit One. A Pretty Good Christmas, by The Disappointment Choir. I know *nothing* about this band, although I probably should investigate them further off the back of this absolutely gorgeous Christmas song. This falls into that slightly-miserable-but-ultimately-hopeful category of Christmas tunes. As I write this we’re awaiting the results of the UK 2019 General Election, and the words to this somehow chime relevant at the moment – “I don’t know what the first of the next year will bring / But it’s going to be a pretty good Christmas”.

Exhibit Two. Christmas Day, by Kasey Chambers. Kasey Chambers is an Australian country singer and songwriter who, over the period of 20 years has established a solid body of work. Chambers was raised a a Seventh Day Adventist, and although she hasn’t aligned herself with the church for a long time, she retains a strong spiritual belief, something that comes through in Christmas Day (from her 2014 album, Bittersweet) which picks up on the religious aspects of Christmas, and offers a telling of the Christmas story.

<I Wish It Was Christmas Today>

Exhibit Four. Vegetarian Christmas, by Feet. Bang up to date, Vegetarian Christmas was – as I write – only released a week ago. But in my book this deserves to become a regular fixture on Christmas playlists. I’ve actually seen Feet a couple of times this year, firstly supporting Lauren Hibberd, the second time headlining themselves. And they were fab! Intelligent guitar-driven indie in a vein not dissimilar to Sports Team, this is a band that is full of character, imagination and variety. Vegetarian Christmas extols the virtues of a meat-free diet with a surprisingly traditional, family-centric view of the season.

One thought on “It’s Christmas!!”